I am just back from London and Paris and am homesick already. But,

and I have lots of memories and pictures to help me remember all that I was able to take in while there, whilst walking at break net speed with a 6’2″ gent.

Hot as could be which was comical given all the sweaters I had packed. As usual I find when traveling you end up wearing just a few outfits, repeating as necessary and not bothering with the rest. Need to mark that in my notes for the next time I leave my zip code.

The Churchill War Rooms were extraordinary. We toured Churchill’s bunker below ground (way below) where he worked during WWII. These folks lived underground and worked all while being bombed by the Germans. They mostly had cots in their rooms where they worked as well. You can see the switchboard operator working from her room. One person had a gas mask in his outbox. Maps are displayed. It was scary. France was occupied and England was bombed. The USA certainly suffered many, many losses but it made it all the more real to see these exhibitions and what the British and the French were faced with. 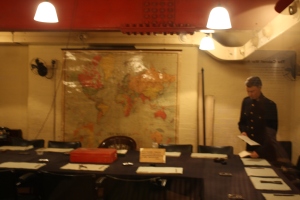 From the Churchill War Rooms

Les Invalides – the War Museum. WWII from the view of Occupied France was quite chilling and understandably so.

The Water Lilies by Monet – exquisite. We saw them in two places: Le Marmatton et L’Orangerie

The flowers. Rose of Sharon standards were the most visible. And, of all things, oleander all over. Reminded me so of Bermuda.

Paris trend: dark red lipstick, as only a young French woman can pull off with style. Lord knows, when there’s a trend the Parisians get on board.

The food. So many little restaurants, sans Michelin stars, serving classic, simple food. I ate fish at most meals.  And I did indulge in some frites which I really think surpass the US version of french fries.Yummy.

Sailboats at the Jardin du Luxembourg 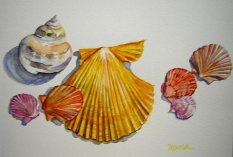 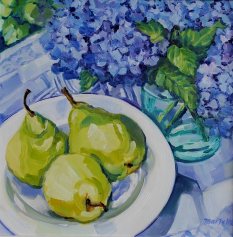